We officially started the trading challenge on the 20th May, so this is a longer update that normal to get us up to date.

I traded this in-play but things went against during the match and I decided to trade out for a small loss.

Traded the over 2.5 market here but the in-play stats weren't to comforting so as soon as we saw a goal, I trade out for a small profit (finished 1-1)

So two winning trades and one loser, leaves me with 0.15 points profit today against our daily target of 0.32 points. 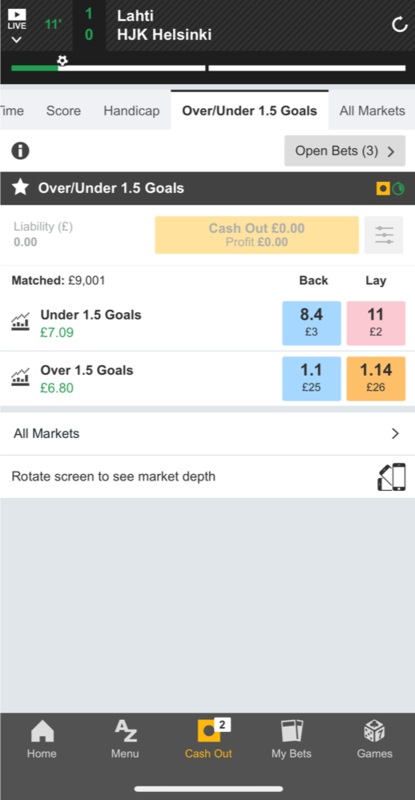 Members of our daily trade sheets had a few options to choose from in the afternoon games. I stayed up a bit later than normal as I there was one game I was keen to trade on. We saw some early action, with a goal in the first 10 minutes – so I was able to trade out for a lower profit figure than I was intending but with the caveat that I was at least able to get some shut eye

This is one of the those perfect trading opportunities. The price in the goals markets was way, way to high and we had a big chunk of value. So much so, I got up early to be able to trade this game.

I was able to exit the trade for an excellent profit (64%) before half time.

Just the one trade for me since the last update, but what a cracker it turned out to be.

Based on our daily trading sheets, the only match that fitted my schedule was the Brazil game between Bragantino and Figurirense. On every level it ticked the boxes and had a high starting price of 1.62. The only hesitation was that the away side had a couple of nil nil draws recently but sometimes its good to go against a trend like that and, as I mentioned, everything else looked to be in my favour. 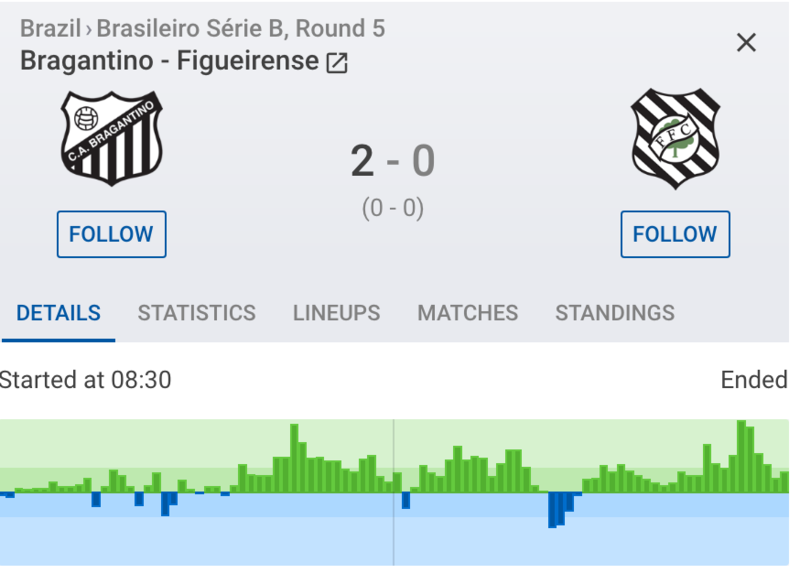 Despite all that, I resisted the temptation to get in before kick off and waited until late in the first half, once Bragantino started dominating. Two late goals turned this into a full 1pt profitable trade.

In summary, three days into our 12 month challenge and I'm up 1.63 points and and just over 2 days ahead of schedule.

I didn't get any trading in on Thursday with the limited fixtures and kick off times not suiting me.

This morning, however, I had a bit of spare time and found myself watching the first half of the Sudamericana game between Corinthians and Deportivo Lara. Corinthians were strong favourites before the game and, as you'll see from the chart below, they lived up to that billing in the first half in every way but goals.

This is an example of where stats (both pre-match and in-play) are not your only option. Sometimes, the best way to spot a trade is simply to watch a game live and make your decisions based on what you are seeing. 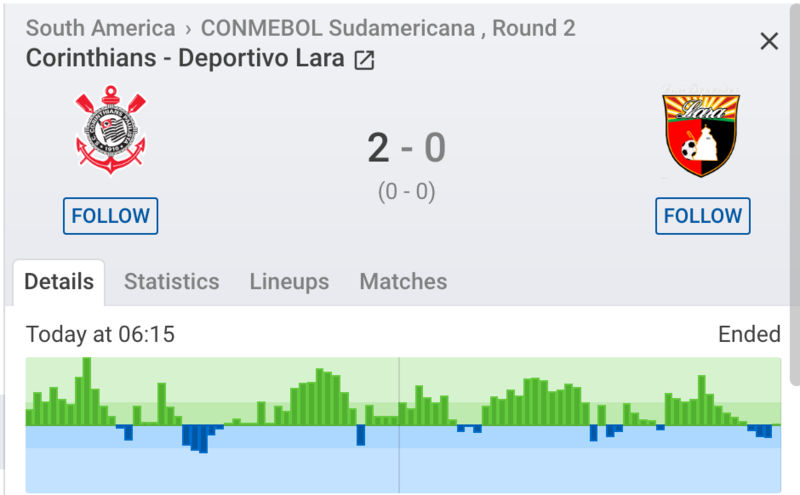 In the first half alone they had 7 shots on target and finished with 24 shots, and 14 on target. 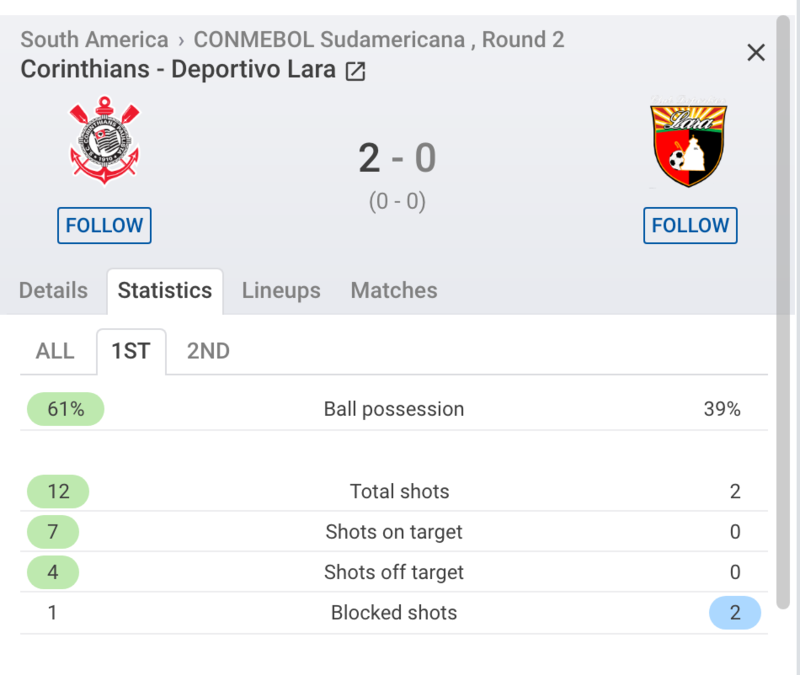 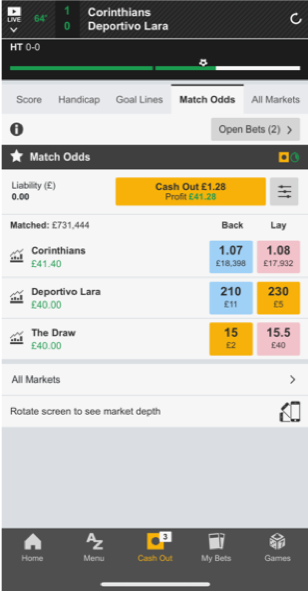 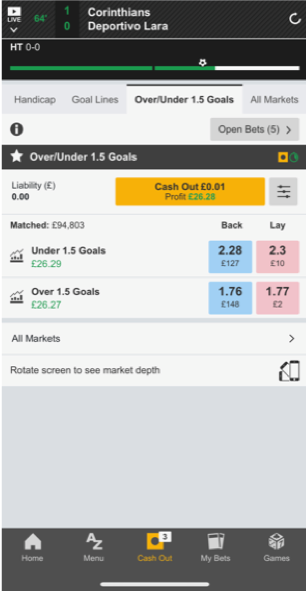 I even managed to squeeze in one more trade yesterday while I was in bed – the late game (for me) in South Korea. 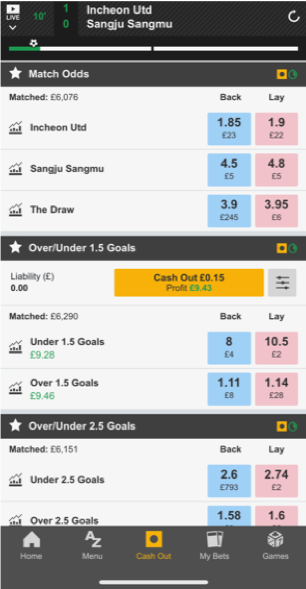 I managed a further three three trades in my morning – CRB started things off and delivered again in Brazil for the Goal Hunter method. According to our daily trade sheets, we were getting a huge 20% value margin so it was an easy choice. 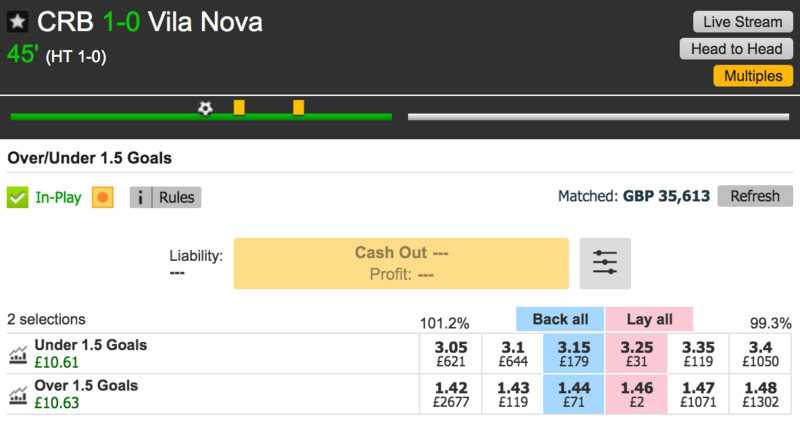 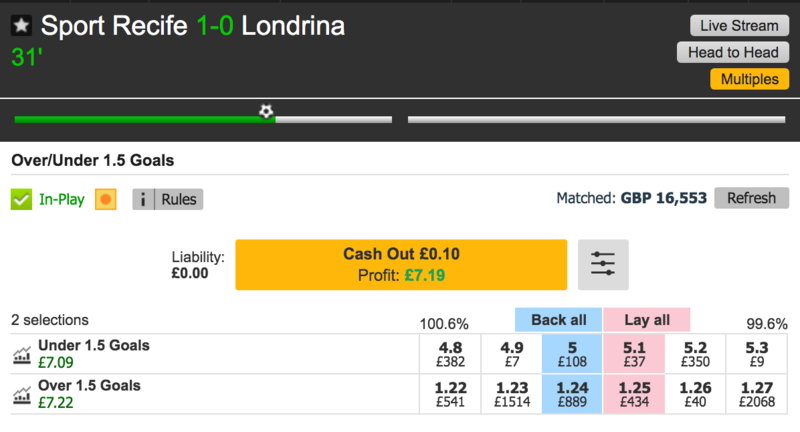 Over in the MLS one game was screaming value, and that was LA FC , three goals in the opening 30 minutes back up that hypothesis and an easy profit. 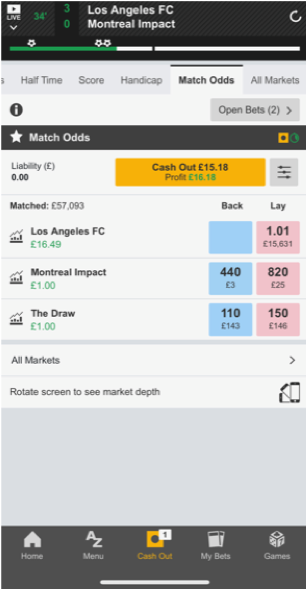 I only got into two trades before Betfair crashed and I left it alone for the rest of the day.

I was in a trade on Sao Bento vs Oeste and SAO Bento took the lead mid-way through the first half which would have been perfect timing had I actually been able to trade out, but the goal went in right when Betfair crashed. I had a choice about whether to jump over to Smarkets or Matchbook or let it ride, I opted for the latter as the in-play stats were good – alas, no further goals were scored and it resulted in a quarter point loss.

I'm delighted with our performance over the first week of the 12 month trading challenge on Goal Hunter.

We've had just one losing trading day which was due to a Betfair crash (thanks Betfair!) and we are 2.49 points up for the week, against a target of 2.26 – almost a full day's trading ahead of where we want to bed.