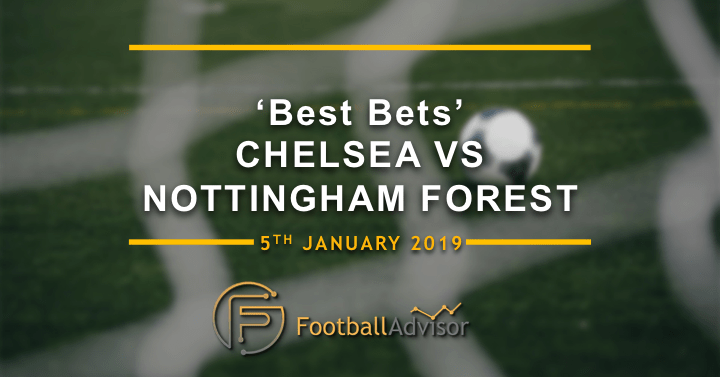 – Chelsea have taken seven points in their last three matches

– City have conceded twice the amount of goals that Liverpool have this season, scoring six more

Chelsea seem to love the FA Cup. The eight-times winners are the current holders of the trophy, and will invite the Karanka’s exciting Forest side to Stamford Bridge on Saturday looking to stroll through to the fourth round.

Forest will have other ideas. Their 4-2 win over Arsenal at the same stage last season will be fresh in their minds as they look to build on a promising season in front of goal. With 14 goals already in the league, Lewis Grabban is the main threat for the visitors who are attempting a win at Stamford Bridge for the first time since 1995.

Sarri has shown he is often reluctant to rotate, however, with the injury list building a fresh eleven will be forced on the Italian on Saturday. With a semi-final against their bitter rivals Tottenham around the corner on Tuesday, Chelsea are expected to field a weakened side against a dangerous Forest.

Injuries to Giroud, Pedro, Willian and Ruben Loftus-Cheek look likely to keep them sidelines for a majority of this fixture; the latter may be used in midfield, however, is still complaining of a back injury.

Morata is likely to lead the line as he tries his best to win the affection of the Chelsea faithful. It’s been hard for the striker since his move to West London, with rumours circulating that he may be on the move in January, along with Cesc Fabregas.

Fabregas is expected to start in place of Jorginho who will earn a deserved rest. It’s been underlined by Sarri that those two players are the only two that will act as the pivot in the Chelsea defence; Sarri will be disgusted if he is sold in January.

Chelsea have shown that they find it hard to break down sides who sit back at the Bridge. Karanka is a well-organised manager who will bring a side to West London capable of frustrating. Chelsea have flair options in the form of Callum Hudson-Odoi, but may lack that killer punch.

Backing a draw at the Bridge shows great value. Chelsea came close to this when they entertained Forest’s rivals, Derby County, in the League Cup a few months back.